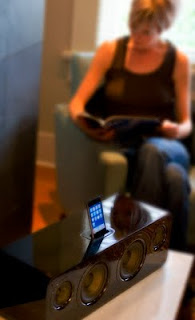 Color your world with a sleek, sexy iPod speaker that delivers bumpin’ bass

Apple’s iPod has spawned an entire industry of accessories, speakers in particular. Here at Mac|Life HQ, we’re constantly testing a stream of iPod speakers, ranging from tiny battery-powered portable models and alarm clocks, all the way up to models meant to pair with full-sized home stereo components. But rarely does something catch our eye like these speakers from Kanto. SYD 5 is bigger than many other speaker docks, and while it could be integrated into a larger home stereo, it’s clearly aimed at people looking for a standalone sound system. It lacks a radio or other functions, but with RCA and stereo mini inputs in addition to the dock connector, it could be used as an ad-hoc sound system with the addition of a CD player or other portable sources. But the iPod is king.

The return of the iPod hi-fi?

With your iPod docked atop the SYD 5, you can crank out impressive sound. Many iPod speakers tend to skimp out on the bass, but Kanto’s speakers performed admirably. We tested the unit with hip-hop, rock, and acoustic tracks—even some speed metal—and we were impressed by the beefy sound. The SYD 5 weighs in at more than 20 pounds, and its four drivers are capable of surprisingly high volume. Two 5.25-inch drivers pump out impressively booming bass, but unfortunately the pair of 3-inch “high-range drivers” end up sounding a bit washed out by the powerful lower end, even at moderate volumes. The SYD 5 is great as a compact sound system for your living room or even a small apartment. The AC power outlet on the back also makes it an attractive choice for remote speakers when paired with the AirTunes function of an Airport Express. And while we weren’t in love with the layout of the remote—unintuitive key placements and no physical cues to differentiate buttons—we appreciated that it allowed full navigation of the iPod’s menus.

THE BOTTOM LINE
A little more crispness in the highs would be nice, but impressive bass, great overall volume, and sleek good looks—available in green, blue, or black—make the SYD 5 a good choice for anyone looking to turn up the volume on their favorite playlist. SYD 5 COMPANY: Kanto CONTACT: www.kantospeakers.com PRICE: $359 REQUIREMENTS: iPod or other audio device