Networking with a purpose to end homelessness in Vancouver

Last Saturday I  was invited to capture Headshots for two Homeless people in Vancouver invited speaking at a Networking Group.  I have always been concerned about the downtown Eastside and wished I could help?

Ricky Shetty is uniting business people and the homeless with the purpose to end homelessness in Vancouver.  Ricky’s plan is simple, network, promote your business, gain new clients during his function.  Proceeds go to help the homeless in an Entrepreneurial matter, not by enabling but by providing meaningful resources.

“I feel it for the business person that hit hard times and becomes homeless, much harder for them…”, explained Sid during our seating session.  “They are so tough on themselves with their expectations, its harder to recover and often they get into the harsher drugs”.  “We see so many of those people, now”.

Sid spoke about his plans to ride to Saskatchewan and is currently saving $5, every cheque to achieve his goal.  He will collect his last  welfare cheque this Summer.

“At times people don’t believe that I am homeless, because of my education and ability to speak well and pretend all is great…” explained Leigh. 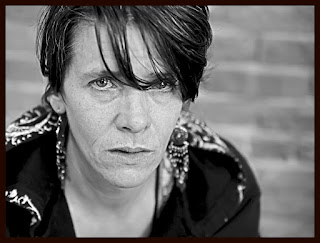 Sid and Leigh are two intelligent talented individuals that are currently homeless, with plans for doing great services to society when they get out of their current situation.  Expect Leigh to become a great counselor, helping others from getting into her current situation.  Sid’s bike trip will raise awareness all around Canada.

Thank you Sid and Leigh for allowing me to capture your portrait, now.  Looking forward to our next session when Sid is cycling and Leigh is counselling street people.